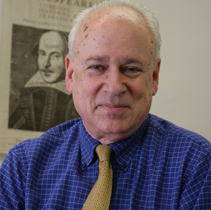 Richard Nochimson is Professor Emeritus of English at Yeshiva University in New York City. His scholarly specialty is the study of the plays of William Shakespeare. He was General Editor of the Pegasus Shakespeare Bibliographies (eleven volumes published between 1995 and 2009). As a teacher, however, he was very much a generalist. Among the courses he taught in the years leading up to his August 2018 retirement were Shakespearean Comedy; Shakespeare’s Contemporaries; Transnational Modern Drama; First-Year Writing; Classical to Renaissance (Homer, Sophocles, Plato, Montaigne, Shakespeare, Cervantes); Fiction, the Artistic Imagination, and the Creative Process; and Studies in the Art of Storytelling (The Odyssey, Don Quixote, Our Mutual Friend, and The Brothers Karamazov).

After decades of thinking about writing fiction, he began to write in December 2006. Huidekoper Cat, and Other Tales is his first published work of fiction. The book is now available in both printed and Kindle form on Amazon. The book is also available in printed form on Barnes and Noble.

Richard Nochimson lives in the Bronx, New York, with his wife, Martha.