Huidekoper Cat, and Other Tales 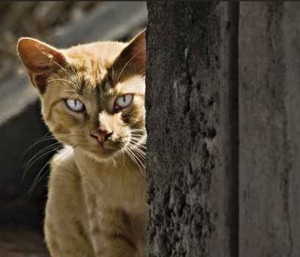 Purchase now on Amazon | Purchase on Barnes and Noble

I loved this collection of stories about characters who live, work, and love in the writer’s sharply recreated world of the 1970’s…. With a warm invitation throughout, the gentlemanly narrator takes the reader into the lives of characters he observes with understanding, compassion, and often amusement. The stories reveal what interesting characters we mortals be in any decade and place. That’s some cat!

A friend of mine lent me this book and it is an absolute delight. It has a special meaning because my daughter lives near Huidekoper Place in Glover Park, D.C. Driving home the other night from her apartment, I saw a large ginger cat about one street away from Huidekoper Place-somewhat like the cat on the cover of the book!…. The writing style is charming and you feel that the author is leading you by the hand through the inter-related lives of a number of characters living in and around Huidekoper Place…. I hope the author puts pen to paper again soon. His “voice” is a gentle one but nevertheless delves deep into the lives and concerns of his characters in an affecting and insightful manner. An unexpected gift!

These seven stories seek to recapture an era: the 1960s and 70s, with a brief excursion into the early 80s. The stories will resonate for readers who remember that era. At the same time, they will intrigue younger readers who understand what Shakespeare meant when he wrote “what’s past is prologue.” The stories will potentially be meaningful to readers of all ages because they deal with relationships (not only marital and sexual relationships), exploring the ways that people successfully and unsuccessfully relate to each other—while seeking, sometimes painfully, to find themselves, and while sometimes having to admit that they don’t fully understand either their own lives or the lives of the people around them.

While each of the seven stories stands by itself, they connect with each other because they share themes and because major characters in one story will occasionally show up as minor characters in other stories. Marilyn Mayer, for instance, one of the major characters in the second story, “The Owner,” makes a brief appearance in the fourth story, “Inez,” which is set a year earlier, and then makes her final contribution to the volume, years later, in the seventh story, “She Knew What She Wanted,” as the psychotherapist who seeks to help our heroine, Miranda Allen, who as a young woman is still attempting to find herself after the childhood loss of her twin brother.

It is noteworthy that, although the author is male, some of his most fully realized characters are women. In several of these tales, the fifth story, “Two Sisters,” for instance, the most important character is female. Brenda Sullivan, the heroine of that story, while devoting a good deal of her energy to the effort to convince some of her neighbors that the President of the United States is a crook (“Two Sisters” is set in Washington, D.C., at the time of the Watergate episode), is mostly trying to work out her feelings about her relations with the various people she is close to, and to understand what she wants in her own life.

One more story, the third in the volume, also has a political background. That story is set in 1968, and the troubling events of that year, including two political assassinations and a controversial presidential election cycle, are very important to the four major characters. Nevertheless, as in “Two Sisters,” the political events are a backdrop for the human drama unfolding in the everyday lives of the characters in the story. Very much of a piece with the volume as a whole, “One Year’s Correspondence” is in one significant way that will surprise many readers an outlier in Huidekoper Cat, and Other Tales.

Basically these stories exist in a realistic mode. There are, however, occasional departures into the satiric and even the surreal. Lester Stern, who appears or is at least mentioned in as many as five of the seven tales, has to deal in the opening story, “Huidekoper Cat,” with a blond kitten who seems to have the intention of bringing Lester closer to his wife and to two of his friends. And in the sixth story, “The Jellyby Man,” where Lester is a more minor character, his role in part is to serve as a guide to a younger colleague, Carl Parker, a college professor who has to deal with the sudden and mysterious appearances in his classroom of a senior professor, an expert in Milton’s Paradise Regained, who seems to come out of nowhere to recite snatches of poetry and to offer jellybeans to his listeners.